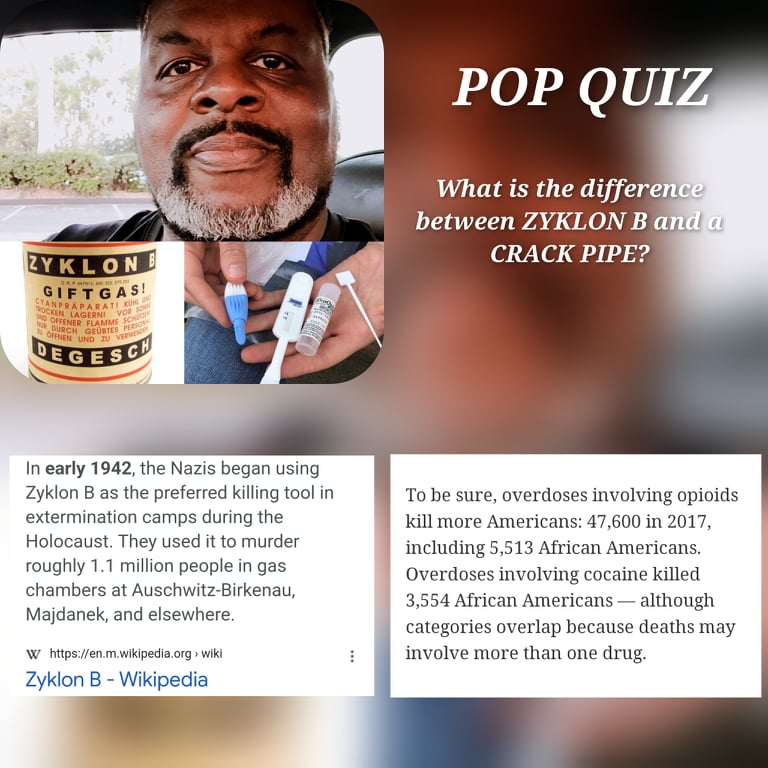 POP QUIZ: What is the difference between ZYKLON B and a CRACK PIPE? One answer is not much, one was used to murder Jews on concentration camp showers, the other is used to murder the free will of America’s poor (and far too many people too). The next answer is ZYKLON B was forced on its intended victims and now the CRACK PIPE is given to its intended victim with the claim it will save lives…? What leader of a people in their right mind who cares about them would facilitate the people using one of the most addictive drugs known to man? The answer no one.

A Nation’s people are the greatest resource of that Nation. Each person is precious in the eyes of God as it should be in the sight of their earthly leaders too. Our Nation is under attack by Weapons of Mass Destruction (WMDs), be it by viruses, the variants or the vaccine, or our by chemical attack in the form of the long time foe of illicit drugs being poured onto our streets. This Nation is beset by a tsunami of drugs, the primary culprit in its various forms is cocaine: the cheapest and most accessible form of cocaine is “crack.” Many have said from the first hit on the pipe they were hooked. Many factors determine how efficacious this drug can be person to person, but data shows it is wreaking havoc in the black community. Add to this scourge fentanyl added to crack or other drugs and you can see this is a serious problem. So why would a government make it easier and all but approve illicit drug use by actually providing the paraphernalia to use those drugs?

One would hope they they would have not have the slightest clue, but sadly the answer is as plain as the nose on our faces, Given the carnage being hooked on drugs causes, the only explanation can be that the government wants to finish off an intended group of people or turn them into a mindless, soulless, automatons who do as they are told. An Ineffective and dependent class of people, after all this latest act of treason by Joe Biden, the Government has just become the local “Pusher Man.” Priming the American population to use drugs can only be good news to the Afghanistan drug lords who even now are preparing to lance their poppy crops.

America is truly a consumer nation and now it seems with Joe Biden as the nation’s chief mob boss. Our children are set to become just like his child: it is no wonder Hunter Biden got hooked on the pipe. Thanks to dear old dad he won’t even have to pay for his next pipe… Even as we attempt to cancel a podcast host for using the “N word” in a contextual manner, here stands Joe Biden by his actions treating the black community with far more disrespect than the N word could convey. Joe Biden is treating his constituents as if they were… Black.

Did the Government Spy on Bibi?

Why I am Not Watching the Superbowl