Top Posts
How Biased FBI and DOJ Officials Broke The...
Hillary’s Hybrid Warfare
Red Flag Laws Serve as a Red Flag
How to Survive in a Society Where “Two...
Episode 23: Israel Under Attack
MLB Hits a Home Run in “Woke” Hypocrisy
Trump Should Bow Out so Republicans Can Save...
Del Beccaro: Newsom’s Double Whammy to California: Drought...
Episode 21: The Case Against Bibi Netanyahu
Packing a New Court, a JV SCOTUS
Contributors

“We will not allow Iran to obtain nuclear weapons”, emphasized Israeli PM Netanyahu.

“Israel is a cancerous tumor and it should be wiped off from the Earth”, ominously declared the founder and first Supreme Leader of the Shia Islamic state, Ayatollah Ruhollah Khomeini (1979-1989). And ever since then, the Khomeinist regime’s top officials have repeatedly echoed that threat.

“The use of an atomic bomb in Israel will not leave anything …”, threatened the ex-president, Ayatollah Akbar Hashemi Rafsanjani (1989-1997), in 2001.

The former hardliner president, Mahmoud Ahmadinejad (2005-2013), proclaimed that, “Israel should be wiped off from the map”.

“The Islamic regime will support any nation and group that will fight the Zionist regime”, declared Islamic Iran’s second Supreme Leader, Ayatollah Ali Khamenei (1989-current), during Friday Prayers on February 3, 2012.

“The Islamic regime will raze Tel Aviv and Haifa to the ground”, warned the terror regime’s top leader, Khamenei, as recently as 2015. 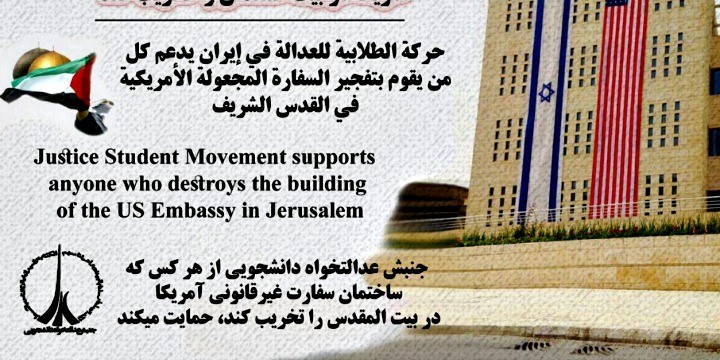 The announcement from Iran’s IRGC-affiliated “Justice Student Movement” encouraging an attack on the new US Embassy in Jerusalem. Image: via The Algemeiner.

The $100,000 bounty for the destruction of the new U.S. Embassy in Jerusalem, as offered by an Iranian student group affiliated with the Islamic Revolutionary Guard Corps (IRGC), is an urgent reminder of the Tehran regime’s long record of attacks against foreign diplomatic targets. “The Iranian regime and its armed forces and militias are experienced in this kind of terrorist act,” is the warning I gave to The Algemeiner on May 15, 2018.

Meanwhile, the Islamic regime is testing missiles capable of carrying a nuclear warhead. It shows its hostile mood by vile slogans, “down to Israel”, and “Israel should be wiped off from the map,” printed on those weapons.

The regime makes a further show of aggression toward Israel by a lot of electronic billboards around the country which display digital time clocks counting down how many days remain until the “destruction of Israel”. The countdowns mostly go on display as part of an annual rally in support of the Palestinian Territories’ hostility toward the Jewish state, known as Al-Quds Day.

Additionally, the Islamic regime has never been hesitant to threaten other nations from its Islamic caliphate territory. In fact, it pursues its regional malicious plans towards its own near neighbors in the Middle East. It trains, supports, funds, and dispatches terror-skilled troops across the region to destabilize neighboring countries.

The Khomeinist regime has deep experience in its method of subversive acts of terror from a distance, which has led to the mass killing and injury of so many Israeli citizens and soldiers by its proxy thugs.

Those thugs openly celebrate such crimes against humanity and nations. For example, in 2019, the Khomeinist-backed Hezbollah released a video of the January 28, 2015 attack on an IDF convoy on the Israel-Lebanon border that killed two IDF soldiers and wounded seven others.

“While Iran [the Mullah leadership] has money, then we have money. I say in front of the whole of world: [Hezbollah’s budget] obtaining costs and Hezbollah’s missiles are coming from Iran and don’t relate to any banks”, admitted Secretary-General of the Lebanese political and paramilitary party Hezbollah, Hassan Nasrallah, in 2017.

This aggression is the deadly work of the Islamic regime that six superpowers foolishly agreed to engage in a flimsy nuclear deal, which only funded the theocrats’ aggression by sending billions of cash into the bank accounts of the Shia caliphate. That money has never been spent on the Iranian people, but instead went to fund warfare by the repressive regime and its murderous proxies.

Based on the track record, the U.S. is right to curb the influence of IRI, which backs Hezbollah and other militias in their acts of destabilizing violence. 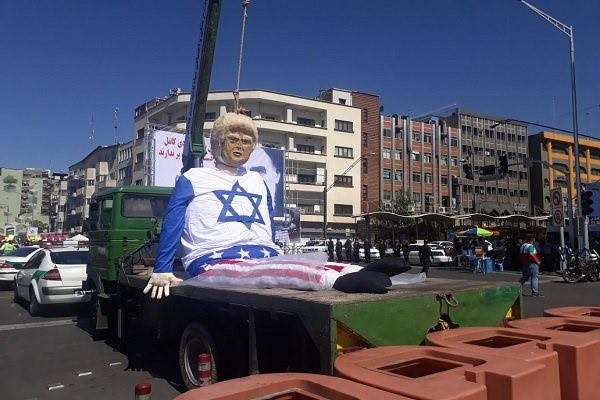 The Islamic regime mocked President Trump and hanged his effigy in the street during Al-Quds Day.

World leaders should acknowledge the Islamic regime’s devilish sabotage activities in the region, if they really seek partnership in peace, assurance, and security. They should acknowledge the legitimacy of Israel’s right to defend herself against aggression by the Khomeinist regime or by any of its proxies.

Kaveh Taheri (Twitter: @TaheriKaveh), co-founder and chairman of the ICBHR.Com, is a Turkey-based Iranian Human Rights researcher and journalist who has worked exclusively on Middle East. Kaveh, who was a former political prisoner in Shiraz, had been sent to prison for his writings and statements on his Websites and Weblogs, in Iran and fled the country through Turkey to save his life.

America on Trial: The Rittenhouse Case

Will Superman Fall to Woke Kryptonite?

Legislating from the NFL

The Racist Hypocrisy of the Left