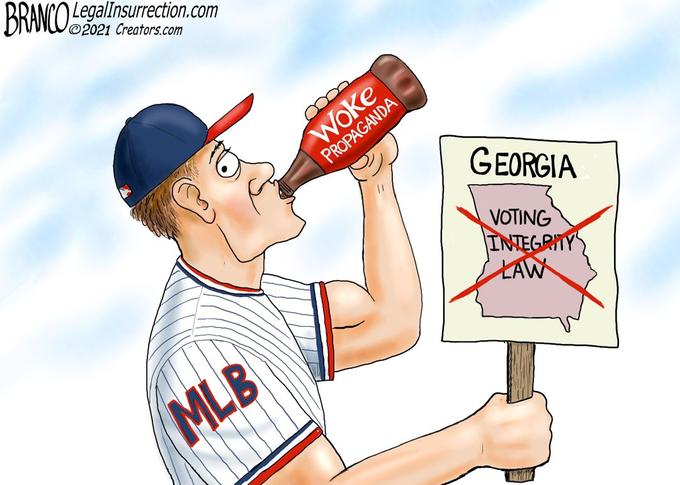 After removing the 2021 MLB All-Star Game from Atlanta, due to the recently passed “controversial” election laws in Georgia, MLB Commissioner Rob Manfred announced the new location for the game – Coors Field, in Denver Colorado.

When I heard this I had a mix of laughter and anger. Laughter and anger that these corporate CEOs think that they are smarter than the general public and that they can hide their real agenda with false virtue and self-righteousness. I guess they figure they have the MSM on their side to mask their hypocrisy and their selfish agenda.

This move isn’t about racial equality, or I should say “equity,” as that is the new key term the left is now using as opposed to equality. This isn’t about unfair voting rights, which is disgustingly being portrayed as the new “Jim Crow”, or as Biden embarrassingly called it “Jim Eagle.” This isn’t about anything virtuous. It is about one thing, and one thing only: PROFIT.

Corporate America has become these self-righteous arbiters of equity and the woke left culture since they started to bow to the leftist Twitter mob. Many being put at the top of these companies claim to subscribe to the “woke” culture of today. The majority of the time, it is nothing but a good charade. Whether some of these CEOs buy into this political garbage or not, nothing is more important than the almighty power of the dollar. It’s shown time and time again, and with the MLB All-Star Game, it is no different.

The limited news media calling out baseball on this issue is focused on how Colorado has similar election laws to what Georgia has just signed into law.  Which is legit. Colorado already requires photo ID when voting in person and first registering, offers two fewer days for early voting than Georgia, and already bans electioneering activists from handing out free food and drinks. On top of that, Denver is only 10% black as opposed to Atlanta which is 34% black (according to 2019 statistics). Interesting for MLB who is all about diversity in recent years.

That alone would make one wonder why MLB would move the All-Star Game to Colorado if the reason was truly based on the new Georgia election laws. The key issue many news outlets are missing though comes from looking at the current capacity levels at these stadiums in this new COVID world.

On Opening Day, the MLB stadium with the largest allowed attendance aside from Globe Life Field in Texas is none other than: Coors Field in Denver Colorado.

Coors Field was allowed to have 42.6% capacity which amounted to 21,470 people. Compare that to only 33% capacity for Truist Park, home of the Atlanta Braves, which amounted to 13,558 people. Truist Park has said they “hope” to be at full capacity by the All-Star game but the attendance maximums would be evaluated as the season moved on. Coors Field is not only ahead of Atlanta in numbers on Opening Day, it looks to move much faster than Truist Park will be able to. The numbers of positive COVID cases and deaths in Georgia (Atlanta) rank higher than in Colorado (Denver).
Texas Governor Greg Abbott already made it clear that his State would not host the All-Star Game. So what is the next best stadium as far as numbers go? Yep, none other than Coors Field. Remember, attendance numbers equal more money.

As a Dodger fan myself, I can speak for many fans who were upset that the 2021 All-Star Game wasn’t changed to Los Angeles, even before this season, and it had nothing to do with Georgia’s election laws. Dodger Stadium was set to host the All-Star Game in 2020, which was of course canceled due to COVID. Instead of pushing everyone back a year, they kept Atlanta in place to host the 2021 Game and gave Los Angeles the 2022 All-Star Game. Wouldn’t it make sense for MLB to just change it to Dodger Stadium since they are next in line, have been prepared to host since 2020 and California Governor Gavin Newsome even tweeted out that MLB should contact him to have the game moved to California?

So why wouldn’t the “woke” MLB leadership choose Dodger Stadium: 1. As already stated, It’s ready to host and was supposed to host last year, 2. It’s in a progressive city that embraces this same “woke” agenda 3. The Governor is totally on board. 4. Dodger Stadium is the largest stadium in all of baseball holding 56K people. Sounds like a no-brainer to me, even if I wasn’t a Dodger fan.

That is why this is all about one thing – PROFIT. These Corporations and their virtues are all for show. MLB did this because it benefits them the most to move the game to a Stadium that has the best shot at being at maximum capacity by July, plus it helps them to avoid any potential issues that could impact the game (aka BLM protests) if it was kept in Atlanta. They didn’t make this change based on values, they took advantage of a situation that allows them to look good while achieving maximum profits for the All-Star Game.

Nothing is worse than the fake self-righteousness of these companies, which want to preach to you about their virtue and dictate what you should believe, even shame you for not praising their “noble” move, while their only true value is putting more money in their pockets.

It’s time to tell MLB, and companies like them, that we see through their virtue signaling charade, and hit them where it matters the most – their profits. How quick you will see these corporations, shift their “values”, or at the very least stay silent about them when they see their bottom line quickly decreasing.

Episode 16 Who Will Go First for Prime Minister

Episode 17 Israel Strikes Back at Iran