Top Posts
How Biased FBI and DOJ Officials Broke The...
Hillary’s Hybrid Warfare
Red Flag Laws Serve as a Red Flag
Yes, The Quinnipiac Poll Likely Is Biased Against...
How to Survive in a Society Where “Two...
Episode 23: Israel Under Attack
Del Beccaro: Newsom’s Double Whammy to California: Drought...
MLB Hits a Home Run in “Woke” Hypocrisy
Trump Should Bow Out so Republicans Can Save...
5 questions for CA Secretary of State Candidate...
Book Brenda To Speak At Your Event

Brenda Higgins was a Certified Family Law Specialist Until 2014 when she left law practice to pursue activism on a full-time basis. Ms. Higgins ran for office in 2010 and was elected to serve on the OCGOP Central Committee in 2012. Her grassroots activism took her to Arkansas where she worked on pro-life campaigns and conservative fiscal issues. She worked with Women Speak out and Americans for Prosperity, supporting candidates like Tom Cotton and Asa Hutchinson. After the 2014 election, she continued this work, opposing tax increases and union lead regulations in Arkansas and surrounding states. In 2016 she campaigned for Ted Cruz in Nevada. Ms. Higgins is now the Southern California Executive Director of Stanton Healthcare International, a non-profit medical center for women whose mission it is to replace Planned Parenthood with life affirming medical care. She writes for both OCPolitical and The127Activist. 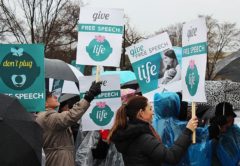