Top Posts
How Biased FBI and DOJ Officials Broke The...
Hillary’s Hybrid Warfare
Red Flag Laws Serve as a Red Flag
Yes, The Quinnipiac Poll Likely Is Biased Against...
How to Survive in a Society Where “Two...
Episode 23: Israel Under Attack
Del Beccaro: Newsom’s Double Whammy to California: Drought...
MLB Hits a Home Run in “Woke” Hypocrisy
Trump Should Bow Out so Republicans Can Save...
5 questions for CA Secretary of State Candidate...
Top Story

Yes, The Quinnipiac Poll Likely Is Biased Against Trump – but trouble looms 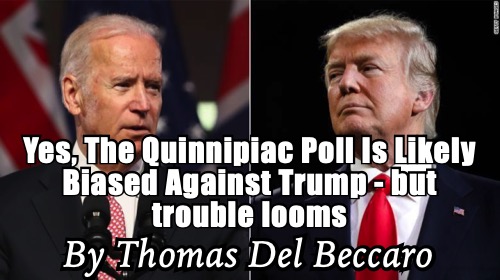 You may have read this headline about the recent Quinnipiac University survey: Biden leads Trump by ‘landslide proportions’ in new national poll

Headlines can be deceiving, however, especially when they are about political polls. The Quinnipiac Poll is likely biased against Trump and therefore paints a picture that is likely false.

There is reason to believe the Quinnipiac Poll favors Democrats.

The Quinnipiac Poll data reveals that “The survey includes 503 Democratic or Democratic leaning voters.” That represents 41.43% of the poll participants. Keep in mind that in 2016, that Democrats made up 37% of the electorate. It is possible that Democrat lean voters in Quinnipiac Poll fairly lift that past number to 41+% – but that is not certain.

Combined, the data indicates that Quinnipiac University may have oversampled “Likely” voting Democrats as part of this poll.

Nevertheless, the data also indicates that Democrats are engaged in this election. That fact that Trump does not have a lead, despite the economy indicates two things:

First, Democrats do not care about the private sector economy. Their economy is the government and that is where they get what they want out of elections.

Notice anything? No economic category is even on the list. They are the party of government from their politicians down to most of their voters.

As such, if the Republicans want to win in 2020, they need to reach Independents and disenchanted Democrats on issues such as healthcare and provide plausible non-government centric alternatives.

Beyond that, it remains true that Trump is not winning over enough voters on personality. He may not want to do that but it is making his reelection chances harder.

In the final analysis, it is unlikely that either party will win by a landslide in 2020 – so, in the immortal words of someone – stay tuned.

To Brexit or Not to Brexit