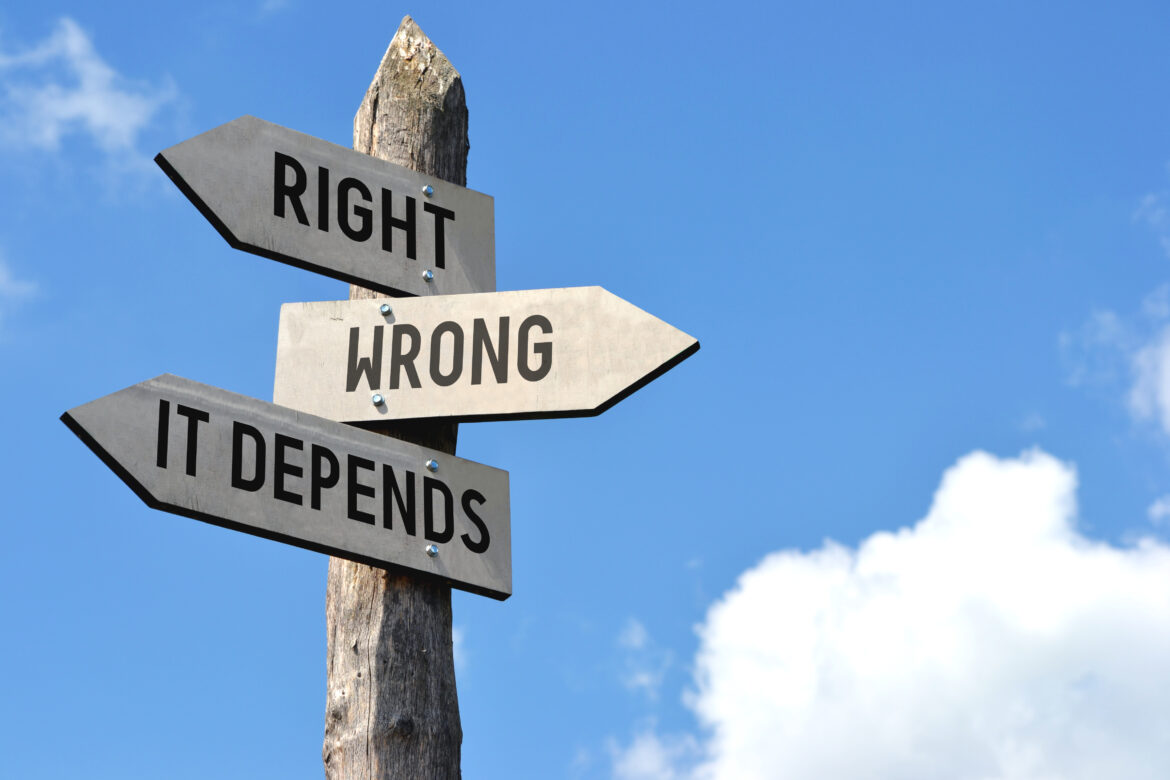 What does a society do when the loud minority believes “two wrongs do indeed make a right”? When “right” is discounted and “wrong” is encouraged? And when they both become gray areas instead of absolutes? It is happening right before our eyes and there is only one solution.

Unethical behavior is now accepted, and ethical beliefs are now censored or mocked. What was once looked upon as “wrong” is now widely justified even if self-harm or harm to others is inherent. Especially if the action solely benefits the individual. If one believes that human beings have a right or instinct to benefit themselves, or to alleviate our own suffering in any way, then that wrongdoing is now deemed subjective and up to the individual making the decision. Without better checks and balances in our government, a religious foundation or in the least a belief in philosophical ethics, self-interest becomes the foundation for an individual’s belief system. If this way of thinking continues, America’s foundation will quickly crumble.

Where America used to only be divided at the polls, we now have become divided within our moral fabric. Our founding fathers as well as the founders of our legal and medical industry, believed both morals and ethics are a necessity in all aspects of society. The Socratic Method is ingrained in the fiber of our medical and legal professions.  Our laws and Constitution are based on these guidelines as well, along with foundational Biblical beliefs.

Without societal guidelines based on a set of rules consisting of “right” and “wrong”, America will crumble. We are now seeing that the Progressive movement does not embrace or even recognize, these guidelines and is widely demanding to be released from ethical accountability. Evidence of this is seen as they constantly redefine “morality” and discount America’s foundational view of “right” and “wrong”. In so doing they have created a worldly concept that selfishly benefits themselves. “Right” and “wrong” have become subjective and “good” and “bad” behavior is now open to interpretation. Both are dangerous precedents for a society to set as it causes a systemic dissonance that ultimately destroys and divides.

How We Got Here

This all happened over time. And we let it happen. It happened when the ears of the weak were tickled by grand orators with unattainable agendas. It happened while parents were not looking, and their children were captivated by social media moguls who took advantage of their insecurities and thirst for worldly knowledge. It happened when we stopped going to church and replaced moral teachings with feel good fallacies. It happened slowly but consistently, and our idleness paved the way to the desensitization of the mind and disregard for the human soul.

Through the degradation of the mainstream media and the uprising of a progressive culture, we have watched society’s moral decline increase before our eyes. The acceptance of a washed-out view of “right” and “wrong” is plastered across our screens, embedded in our school’s curricula, taught in many of our churches and embraced by a generation who has been parented by social media. Murder of the unborn or an innocent bystander caught in the crossfire of a “protest” is now not only acceptable but praised. Wrongdoings are convicted in one instance, yet in another, it is idolized and worshiped. Criminals are protected, while those who protect and serve are criminalized. Lawlessness has become the rule of the land, and wrongdoing is justified. Wrong is right and anything goes now, all in the name of moral progression and “equality for all”.

The Psychology of Mass Media Manipulation

As an individual’s mind becomes increasingly desensitized, it then becomes susceptible to the message of the masses. Risking being censored, mocked, or bullied because of a core belief system can be traumatizing to the mind. Strong minds with a moral foundation will be able to endure this kind of challenge. The weak will not and will eventually cave as the need to belong and be accepted can be stronger than the need to fight for what is right. In essence it is survival of the fittest, yet the mentally “fit” are quickly becoming the minority.

Though it may at first feel illogical, eventually group think will take over and morality will be compromised in an effort to fit in. This quickly opens the door to “wrong” and “right” becoming gray areas and moral compromise quickly follows. Peer Pressure in its rawest form.

Next, in a last-ditch effort to belong, due to the daily pressure of the media, the Hollywood culture, academia, and social networks, truth becomes relative, facts are up for interpretation and dissenters become the enemy. Reality is now based on impulsive actions, shallow emotions and whatever group think leaders deem to be “truth”. And like in any cult or peer group scenario, the more a person is exposed to this, the more it spreads like a wildfire in July. It knows no bounds and does not consider others. It simply forges on until it destroys all that is in its path in the name of a distorted concept of “right” and “wrong”.

There are no longer any clear rules or a common moral code, action is driven by emotion and impulsive behavior becomes a justifiable action. This mentality, void of ethics and values, becomes a dangerous psychological trap as it plays on the minds of the weak and misguided and causes a great dissonance between human and Creator.

Our Historical Leaders Hold the Solution

Although I am a very strong believer in God, I also have come to appreciate the wisdom of past philosophers. Taking from both ideologies, I believe we can find common ground. Though God created the book on morality and love, Socrates awakened the discussion on justice and ethics. He warned of the dangers of entitlement and materialism on a society and even believed that appropriate, ethical, non-violent civil disobedience, also had its place. However, he believed society should do so under the assumption that all actions are based on a common ethical belief system. The Reverend Dr. Martin Luther King Jr. (MLK) embraced Socrates’ philosophical beliefs in this area as well as he led peaceful marches and promoted Biblical concepts of morals and ethics. MLK also knew that society needed to equally embrace a unified concept of “right” and “wrong”.

Jesus Christ, whether your Lord or simply an historical figure in your mind, also outlined a moral code that many still today believe is necessary and beneficial for a society to exist and thrive. He was consistently clear about the line between good and evil, and the importance of knowing right from wrong, stating that without it, civilizations will fall. And many civilizations have proved this to be true. Are we in fact next?

Socrates, MLK and Jesus Himself, all outlined a philosophical code of ethics that were very similar. And no matter what our background or belief system may be, we have three brilliant men who at different points in time and history, changed the world for the better and believed that it was imperative for a society to unitedly embrace one singular definition of “right” and “wrong”. Right and wrong are not interchangeable and doubling up on “wrongs” will never take the place of what the right thing is to do.

Law and order requires moral consistency and ethical integrity and we must all be on the same moral page for society to thrive. We must agree that right is right and wrong is wrong based on a singular belief system. It can never be subject to the whims and “feelings” of every individual that simply wants a say in the matter. We must continue to push for moral integrity in our schools, in our towns, in our government and most importantly, we must teach it in our homes. The wisdom of our great teachers and philosophers needs to be embraced and the entitled, immoral, dregs that seek to overpower and manipulate, need to be voted out and replaced.

As Americans of integrity and good character, we need to call upon our Creator for wisdom and strength and take a stand against evil in any way we can. When they strike low, we must take the high road. When they choose to destroy, we must go in and build back up. When they strike out in anger and contempt, we must lean in with love and mercy. And by doing this, we can be the example for the next generation and hopefully continue to be blessed as a nation.

Episode 19: $250 Million for the PA and Bibi’s Last Chance to Form a Coalition

Does the Biden Administration Want A Nuclear Iran?