Top Posts
How Biased FBI and DOJ Officials Broke The...
Hillary’s Hybrid Warfare
Red Flag Laws Serve as a Red Flag
Yes, The Quinnipiac Poll Likely Is Biased Against...
How to Survive in a Society Where “Two...
Episode 23: Israel Under Attack
MLB Hits a Home Run in “Woke” Hypocrisy
Del Beccaro: Newsom’s Double Whammy to California: Drought...
Trump Should Bow Out so Republicans Can Save...
Episode 21: The Case Against Bibi Netanyahu
Tom's ColumnsTop StoryUncategorized 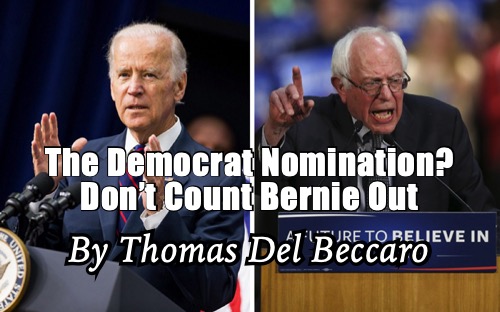 The first of those is Iowa.

Despite Biden’s lead in national polls, that Iowa poll shows Biden and Sanders tied at 19%.

How is that possible? After all, the national media (all but working for Biden) has declared Biden the winner already. Haven’t they?

Part of the reason Bernie is polling well in Iowa is that Bernie ran in Iowa in 2016. Joe Biden didn’t. Because of that, Bernie has a presence Biden doesn’t. According to the Des Moines Register, Iowa’s paper of record:

“Nine months ahead of Iowa’s first-in-the-nation caucuses, Sanders already has amassed a list of 24,000 committed volunteers — many of them 2016 holdovers — while many other candidates are still working to introduce themselves to Iowans.”

Also, keep in mind that Joe Biden is at his high water mark.

Trouble lies ahead for him because he is a bad candidate as I outlined in this article for Fox: Joe Biden’s 2020 Run Is Over Before It Started. Here’s Why.

Further, soon Biden will have to answer for all of the sins of the Obama Administration’s domestic spying on the Trump Campaign – as I wrote in this Fox op/ed: President Obama is a drag on 2020 Democrats, and that’s a win for Bernie Sanders

In the final analysis, Bernie Sanders has advantages over Joe Biden, including the fact that he has a message. On the other hand, ask yourself, what is Biden’s message? Does anyone really want him? Or do they just think he can win?

Finally, I am reminded of the 2002 Republican nomination for Governor in California. Richard Riordan was the presumed nominee because he led in the early polls. Riordan also had money and TV ads. Bill Simon, on the other hand, had the message and the committed volunteers.

Bernie Sanders can do the same in Iowa.

Like Reagan, Trump and the Economy Are Winning Over Millennials – by Thomas Del Beccaro